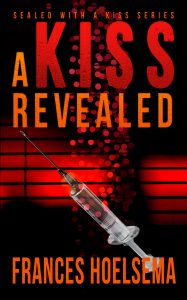 A Kiss Revealed
(Sealed with A Kiss - Book 2)

For weeks, The Margaret Killer terrorized Crimson Shores, claiming the lives of seven people. Suspect number one is Laura Keaton. She looks the part. She has a connection with each victim and can’t provide a credible alibi. Evidence for each death was found in her home. And then Detective Kojak discovered her birth name: Louisa Margaret.

Now arrested and facing trial, Laura maintains her innocence. But while in prison, The Margaret Killer disappears. Coincidence? The prosecution doesn’t think so. They use that fact, along with the rest of the evidence to prove Laura’s guilt.

However, an anonymous tip throws the whole case on its head. Not only does it provide definitive proof of Laura’s guilt or innocence, but it raises more questions even while revealing deeper truths.

It also forces The Margaret Killer to reappear…with a vengeance.