I’m excited to announce that my newest release is finally here! 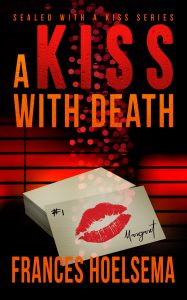 A Kiss with Death is book one of what is a four-book series in the crime thriller genre. Each book is rated PG-13 or so as there is murder, some seduction, and occasional drug/alcohol references. However, there is no swearing, and no on-page/descriptive sexual references and/or graphic violence.

Here is the blurb:

After a rough past, Professor Laura Marie Keaton now has the perfect life. The perfect house along the lakeshore. The perfect job at Capstone University. The perfect boyfriend who she knows is the one. The only thing she doesn’t have? The perfect alibi.

One piece of information about Laura’s past holds the truth. But like everything else with The Margaret Killer, it may not be what it seems.

As of right now it is available in e-book format only through Amazon. However, the paperback and audiobook versions are in the works!! With many twists and turns and a smidgen of suspense and mystery, you will not want to miss this series. I’d love for you to check it out, share with a friend, and even leave an honest review if you get the chance!

To get your copy, please head to:

Thanks for stopping by! Take a look at this brand-new fantasy adventure story with a hint of romance by author Annie Douglass Lima.

Book Description:
Life as the king’s younger sister should be exciting.

Not for Princess Kalendria. She’s sick of the dissent and of constantly having her
family undermined by those who think they could rule Malorn better than King
Korram.

Hoping to lighten the mood in the palace, Kalendria plans a ball to celebrate her
seventeenth birthday. It doesn’t hurt that their handsome Alasian ally King
Jaymin has promised to attend, and she’s been waiting for him to notice her for
as long as she can remember.

But unfriendly forces have their own party plans. When Kalendria, Korram, and
Jaymin barely survive an assassination attempt, their only recourse is to flee
into the wilderness. Tracked by unknown assassins, they must figure out whom
they can trust and who is behind the plot. Can Kalendria help her brother
reclaim his throne – oh, and catch Jaymin’s attention while she’s at it –
before they are all killed and war destroys both kingdoms?

to download your copy of King of Malorn on Amazon now!

to see King of Malorn on Goodreads.

King of Malorn is book 5 in the Annals of Alasia. But don’t worry if you haven’t read the others; it will still make sense on its own.

Each of the first four books can stand on its own as well. They each deal with events surrounding the same major political incident: the invasion of the kingdom of Alasia by the neighboring kingdom of Malorn.


Prince of Alasia begins on the night of the Invasion and describes what happens to twelve-year-old Prince Jaymin after he is forced to flee for his life.

In the Enemy’s Service features a girl as the protagonist and tells the story of those who were not able to escape from the Alasian palace when the enemy invaded.

Prince of Malorn begins several months earlier and focuses on the Malornian perspective of the events leading up to the Invasion.

The Nameless Soldier shows how a young Alasian soldier lives through the Invasion but then has to survive and make a name for himself in enemy-occupied Alasia.


In each of the books, main characters from the others make brief appearances and interact with each other
at the point where the timeframes and settings overlap.


Annie also has a short ebook of “interviews” that she conducted with the characters in the other three
books. Annals of Alasia: The Collected nterviews is not available on Amazon, but she sends a free copy to anyone who signs up for her mailing list (to receive updates when she releases new books or occasionally offers them for free).

Annie Douglass Lima considers herself fortunate to have traveled in twenty different countries and lived in four of them. A fifth-grade teacher in her “other” life, she loves reading to her students and sparking their imaginations. Her books include science fiction, fantasy, YA action and adventure novels, a puppet script, anthologies of her
students’ poetry, and Bible verse coloring and activity books. When she isn’t
teaching or writing, Annie can often be found sipping spiced chai or pomegranate green tea in exotic locations, some of which exist in this world.