Reluctantly Married is the second installment of the Married Series by best-selling author Victorine E. Lieske. This is also the second book from this series that I have read. You can find my post about Mistakenly Married HERE.

Because these are all standalone novels, you can read them in any order. That explains why I have yet to read the first, lol! Someday, though!

Anyway, back to the review. Let me share with you the cover to this book, as well as its blurb, before filling you in on what I liked, didn’t like, and my overall rating. 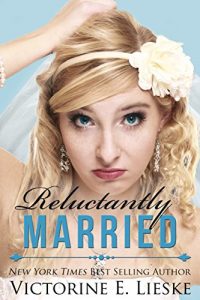 Megan Holloway can’t stand her local morning show co-host, Adam Warner, even though he’s a total hunk. He goads her on-air until she says things she regrets. But since ratings increase each time they have an on-air fight, the producer encourages his behavior.

When a relationship specialist comes onto the show purporting that Adam has hidden feelings for her, she reluctantly agrees to go out with him—on camera. What starts out as one date turns into a viral dating show with Megan and Adam alternating between locking lips and knocking heads.

As Megan fights her growing attraction to Adam, their popularity increases and ABC takes notice, offering them their own program. Not a morning show like Megan is hoping, but a dating show in which she and Adam must marry at the end. With the promise of a hundred thousand dollars and the possibility of scoring what she really wants, her own national program, she signs on.

What she doesn’t know is that Adam has fallen in love with her, and his objective is to get her to do the same.

This book reminded me of two TV shows. One was Full House. There is an episode where Danny Tanner and Vicki Larson bicker on set. Maybe not exactly bicker, but you can tell there’s tension. Later in the season you see they end up dating and so forth. This is exactly the type of atmosphere you’ll find in Reluctantly Married. The two main characters are co-hosts. You can tell there’s tension. At first it’s for ratings, but things eventually get real.

Another show it reminded me of was The Bachelorette. The climax of this story is the two main characters doing a show pretty much exactly the way The Bachelorette goes. There’s more than one man trying to win the female’s heart. In the end they get engaged.

So having said that, I thought it was kind of cool to relate to some things I have seen before.

The storyline is clean and well written, and started out fun at first. I liked having the “war” between the two characters. There’s even this one date night activity I’d like to try with my husband. If I do, I’ll blog it so you can all know!

There were a couple of things I didn’t like. I didn’t think this was a comedy, even though that’s what the book’s page on Amazon stated. However, that’s just my opinion. I also thought that the storyline got old. Like I said, started out fun at first. After that, though, I just wanted them to move on with it. The whole dating dragged on.

One final thing was how it ended. For most of the book, we see the female’s view. She’s falling for the male. Occasionally you get a small idea that the male is falling for the female, but not enough to warrant the ending. Basically, at the end, it’s the male character declaring his “love”, but I just didn’t feel it. I would have thought the female would have.

All that said, the ending was still great. I always like happy endings!

I have rated this book 4 stars! If you’d like to read for yourself, please go to: