I bring to you another review installment from one of Victorine E. Lieske’s The Married Series books. This time I read the book ‘Acting Married’. It’s the fifth book in this series. If you recall, I’ve also read the second book called ‘Reluctantly Married’ and the third book called ‘Mistakenly Married’. You can find their respective reviews HERE and HERE. And, as you can see, The Married Series books do not need to be read in order. All of them are standalone sweet romances.

Without further ado, here is the information on Acting Married, as well as my review! 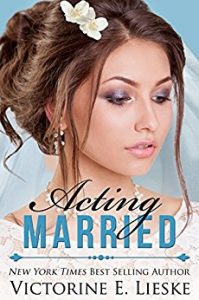 Tara McDermott needed a job, so she took the only thing available—cleaning house for the swoon-worthy actor, and Hollywood Bad Boy, Rick Shade. When he comes up with a crazy plan to tame his wild reputation by marrying her, she reluctantly agrees so she can pay off her debts and move her daughter back to the Midwest where life is simpler. If only he wouldn’t make her heart pound every time he kisses her.

Rick’s reputation is in the toilet and it’s affecting his job. In order to get a good role, he needs to show Hollywood he’s now a family man. After enticing Tara with a large sum of money to go through with the farce, he sets out to show the public he’s in love. But Tara’s soft lips keep calling to him and soon he doesn’t know what’s pretend and what’s real.

I have to admit that out of the three books I’ve read so far in this Married Series, I enjoyed this one the best. However, I think it fits right in line with the others. They’re sweet. They’re clean. They end happily-ever-after, the way a good romance should, in my opinion. Perhaps what made me like this one most was that it has some Hollywood-ness to it.

The author did a great job writing this book. It flowed nice, and I loved how each character had the same amount of time devoted to them. It helped me to connect with them, and have a deeper grasp on how they felt towards the other. In my opinion, that just makes for good attraction, tension, and ultimately, a head-over-heels-in-love romance.

With all of this in mind, I rated the book four stars. It was one star away from perfect because of the ending. It’s not that the ending was bad. It’s just that I felt it lacked a punch or something. I can’t put my finger on it, so I apologize for being very vague. I still enjoyed the book very much, and would totally recommend to those looking for a clean, sweet romance to read.

To get your own copy, you can go to this link: