For my husband’s birthday not too long ago, I decided to surprise him with a date night. He had to work all day so a night of fun and relaxation would be good for him. I didn’t want him having to wear his work clothes as we went out so I took it upon myself to pick out an outfit for him! (It didn’t work out because I failed to see the shirt I wanted him to wear had a stain on it.) Oh, well! Regardless, I picked something out and left this note on it: 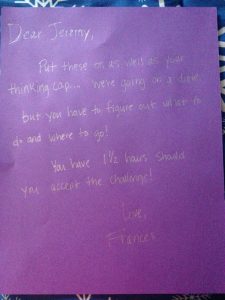 It may be hard to read so this is what I wrote: Dear Jeremy, Put these on as well as your thinking cap…we’re going on a date, but you have to figure out what to do and where to go! You have 1 1/2 hours should you accept my challenge! Love, Frances

Do you think he accepted? ABSOLUTELY!

So what did we do that night? My husband LOVES going to watch movies so it came to no surprise when he said he wanted to do that, as well as get some Chinese food to eat. (Another no surprise – he loves Chinese food!) I definitely had no complaints since these also top my list of night out activities!

Anyway, we went to this fabulous, authentic, sit-down Chinese restaurant where we ordered a dinner for two. I swear that dinner could be for more, though. It comes with egg drop soup (the best, in my opinion), two egg rolls, four crab rangoons (my favorite), and then fried rice with two meat dishes. We were stuffed, but it was oh, so good!

When dinner was done, we went to watch “Beauty and the Beast.” We were hesitant at first because of a few things, but being one of the better options, why not?!??! I want to say that we were not disappointed. I think the acting was great. The singing was overwhelming at times, but you would get that with any musical. I actually had to laugh because my husband apparently didn’t remember that the original cartoon had singing. After a couple songs he asked if I knew it was a musical, and I just had to flat out tell him it’s all in the original, too!

One of the things we watched for was based on some news that had been going on around this movie. Some people were making a fuss about there being a part in the movie that would make gay people proud. I have to admit when I read that article that it turned me off from the movie a bit. NOT because I have anything against homosexuals, but because I didn’t think that would be true to the original movie, and who here likes it when things change!?!? Not me anyway! I also don’t like it when people use certain entertainment just to get their own views across. It happens a lot, though, I know.

So anyway, after watching the movie in its entirety (and I mean until the last of the credits scrolled past the top of the screen), we both came to the same conclusion: there was nothing that would have made me believe it was a moment for gay pride! In fact, had I never heard about this in the first place, I would never have once thought any of it promoted or supported homosexuals.

I share this because some of you may have heard the same thing and will not watch it now. I think it’s still worth watching! The movie was extremely well made, and I’m looking forward to when it’s on DVD so I can show the kids!

As a bonus, Ewan McGregor was in there! I had NO idea! He’ll always be Obi-Wan Kenobi to me, though!

This year I have been inspired to try new things, mostly in what my husband and I do on our date nights. No matter what we do, I always enjoy my time with him. However, I do want to span our horizons beyond a movie and dinner. Thankfully, my husband is more than happy AND willing to try all these new things with me!

Our 11th anniversary was just a short time ago. We made it our goal to do something different, something new. I’m excited to share with you that it was a success!! Here’s what we did!

Just recently the western Michigan area has been getting some Chick-fil-As. For some of you this is no big deal because you’ve always had them around. We, however, have not. And we really haven’t been in any areas where they were around. But we’ve sure heard about them! There is a lot of hype around their 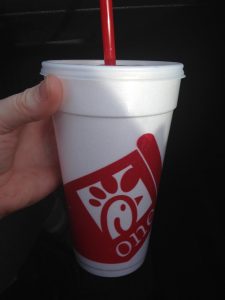 chicken and their special sauce. So because we needed someplace quick to eat, and this restaurant is now around, we decided to give it a shot.

Lol – here is a shot of me holding their cup. We actually shared a cherry coke. This after we remembered we were supposed to try their tea. Whoops! I guess we’ll have to go back and try it again!

Overall, it wasn’t a bad experience either. The sandwiches were good. The waffle fries were sure different. I’d go back again if we felt like chicken. I think the best part, though, was the sauce. OH MY GOODNESS, that sauce is really, really good! I liked dipping my fries in it, and I loved putting the remaining sauce on my sandwich!

After eating at Chick-Fil-A END_OF_DOCUMENT_TOKEN_TO_BE_REPLACED