Growing up, we usually did one parade on Memorial Day and then one on 4th of July. There were also a few years in there where we did what was called the Dandelion parade, and that was only because I was in it, playing the flute. Other than that, parades either weren’t happening, or we weren’t going.

On another note, parades always seemed to be the same. You’d have your marching bands, your fire/rescue vehicles, odds and ends, and perhaps some “important” people. Most kids would get their fair share of candy, and when all was said and done, you’d possibly walk away discussing the best part of the whole thing.

Things are different today. At least in my neck of the woods. Now that I’m an adult, I get to choose what I want to do. Before kids, I wouldn’t go to the parades. I didn’t really see the point of them, I suppose. Or perhaps didn’t think they were cool. Who knows. With kids, though, I make an effort to take them because it gets them out of the house, it exposes them to some neat things, and let’s face it, I get excited when they get excited!

Another reason we will take our kids to different parades is because they’re not all the same anymore. Yes, you still have your fair share of the same type of participants (rescue/fire vehicles, “important” people, etc.). But there are new types of parades that I never knew were around when I was a kid (and maybe they never were). One is a fire truck parade where it’s basically all fire trucks. Another is the truck parade. This year, we had tons of semi trucks and other types of trucks making their way down our city’s center. Our boys loved that! There’s also Christmas parades, pumpkin parades, and so many other types of parades! My neck of the woods has sure gotten interesting!

Take for instance this year’s 4th of July. We typically stay more local, but we heard there were going to be some pretty “top dog” type of people at a different parade so we traveled there. It was a hot day, and the parade didn’t get down to our part of the route until an hour-and-a-half after it started. The locals said it is usually forty minutes, and that it was longer due to those “important” people. Other than a few minutes of these flying overhead, we had nothing to do but sit and sweat, waiting. 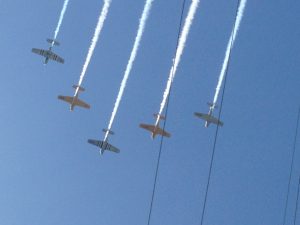 Normally I would complain or think this would be disastrous because what kids would want to sit around forever in the heat?!? However, I’m so glad to report my kids handled it well. AMAZINGLY well! Who would have thought my kids could do that?!?! LOL! They have their moments.

Anyway, alas, the parade got to us, and, yes, we got to see some “cool” people. The first is a picture of our Governor, Rick Snyder. The second is of our Vice President, Mike Pence. 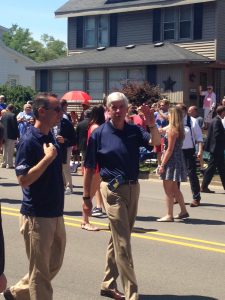 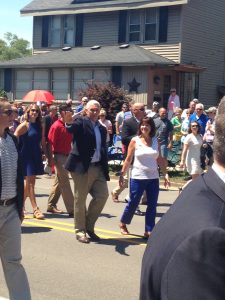 It’s kind of cool that, in both pictures, it looks like they’re waving at me. At me!!!! And I know both these men aren’t the most popular, but I thought it was still neat to see them, seeing as it’s not a common thing for me or my family. Just the thought that my boys got to see these governmental figures at such a young age amazes me.

So, parades. I’ve come to sort of enjoy them. They’ve grown on me, so to speak. So much has evolved over the years surrounding the idea of parades that they’re just great experiences. The only downfall is that not as much candy gets passed out anymore. Good for the kids because they don’t need the candy, but boo for me because I don’t get it either, lol!