If you’re into music and books, I may have something you’d be interested in reading. It’s called 2000 Tunes by Karl Drinkwater, and, well, it features a main male character who lives for music. Though it speaks of music of the late 80s through the 90s, I actually knew some of the references! That was kind of neat.

Let me tell you more about this book by, first, giving you the book’s blurb; and then second, my review:

“He started to sketch a face. A random face. 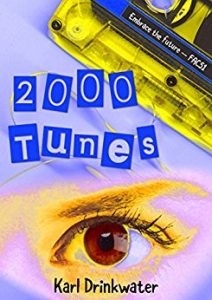 With dark eyes and hair. Just any old face. He made the chin too small and drew over it, but then it looked like a double chin. That wasn’t appropriate for… Ah. He had been drawing Sam.”

Mark Hopton’s an outsider obsessed with Manchester music. He knows the dates, facts, band members, lyrics, histories and places. He can join them in complicated webs of association because he knows the secret: everything’s connected. Music’s his escape into a better world.

Oh man, he needs that escape. His dad’s in prison, his psycho brother’s only one step away, and they’re twisting his melons trying to make him risk his freedom by smuggling drugs. It ain’t easy saying no when family and their shady contacts can be bone-breakingly persuasive. Heaven knows he’s miserable now.

The summer sun does bring one ray of light: he secretly admires Samantha, a beautiful Welsh girl at work. Watching her is like listening to music, it strengthens him, she’s his wonderwall of true faith. He’s happy with that. Love is fool’s gold.

Meanwhile, Samantha’s been caught up in a hedonistic lifestyle of cigarettes and alcohol with the 24 hour party people but now she’s had it up to here with Mancunians. Cheaters, weirdos and two-faced scummers, the lot of ’em. When the drugs don’t work it’s time to grow up but no-one’s going to take her for granted again. Don’t look back in anger? Screw that. She’s never been one to walk away.

2000 Tunes is a meditation on life, family, friends, growing up, and following your dreams.

Like I briefly mentioned already, there are a lot of END_OF_DOCUMENT_TOKEN_TO_BE_REPLACED