When most people say the phrase “water under the bridge,” it’s to mean events or situations that are in the past, and therefore, are no longer important or needed to be concerned about. I’m not about to rehash any water under any of my bridges, but I do want to fill you in on a book that goes by this phrase. I’m talking about Water Under the Bridge by Britney King. Take a look: 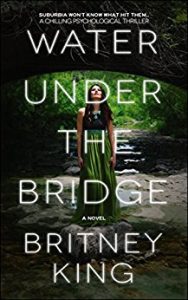 As a woman who feels her clock ticking every single moment of the day, former bad girl Kate Anderson is desperate to reinvent herself. So when she sees a handsome stranger walking toward her, she feels it in her bones, there’s no time like the present. He’s the one.

Kate vows to do whatever it takes to have what she wants, even if that something is becoming someone else. Now, ten pounds thinner, armed with a new name, and a plan, she’s this close to living the perfect life she’s created in her mind.

But Kate has secrets.

And too bad for her, that handsome stranger has a few of his own.
With twists and turns you won’t see coming, Water Under The Bridge examines the pressure that many women feel to “have it all” and introduces a protagonist whose hard edges and cutthroat ambition will leave you questioning your judgment and straddling the line between what’s right and wrong.

First off, I want to warn you that this is a slightly dark fiction. Having said that, it’s not clean. As with many thrillers, there is some language. There is also very brief talk of sex, but nothing too graphic mentioned in that department. And there is quite a bit of violence. After all, the two main characters are murders for various reasons.

What I found fascinating about this novel is that it was laid out different than I have ever seen before. Each chapter went back and forth between the female’s point of view and the male’s. You’d think that would make for some possible confusion, but the author did a great job keeping things straight, having the stories match up, and keeping the dialogue flowing nicely so that the reader doesn’t miss out on anything.

I believe the author also did a fantastic job with details. How the characters connected, the chemistry and commitment they had for one another, was well woven in, and made for a great domestic/psychological thriller.

Although I enjoyed the book, I rated it one star shy of perfect…in other words, just four stars. I don’t think there are twists and turns as the book’s blurb indicated, at least nothing that caught me off guard. I also didn’t think there was a lot of depth. It was more following along with how the characters met, got married, and moved on from a possible divorce.

Before I go, I want to mention that this book is FREE. It’s also the first in the Water Trilogy series so there is even more to the story than just this book. To find out more, please visit here: