We’re very fortunate to live near the West Michigan shoreline, which means a lot of beaches and plenty of sand dunes. One of my earliest memories is of me running down a sand dune, falling flat on my face, my head in the sand. I fell so fast that it felt like my head should have still been at least four feet in the air as if I was standing. Good times, good times.

I don’t so much run down the sand dunes anymore, but my husband and I have been doing a lot of climbing up them! Each Sunday we take our boys on a hike (weather permitting), and some of those hikes include climbing the sand dunes, which they love and often ask for!

One really neat sand dune is called Mt. Baldhead. For short, we call it Mt. Baldy. It’s in Saugatuck, and has about 302 steps to the top. That’s a ton of steps at a fairly steep incline, but thankfully there are plenty of spots to rest. We all know we could use them! Here is a pic of the steps…and this isn’t all of them:

A lot can be done or seen when climbing these dunes. Here is what we saw/did last time we went to Mt. Baldy:

-As we were looking around while we rested, two deer were laying down a short way off. It was kind of a shock because usually we see deer on flat land, but this particular sand dune is surrounded by tons of trees so it’s understandable. Here is a pic of the one:

-At the top we wrote our names in permanent marker on some wood so that  the next time we visit we have something specific to look for. The boys thought it was cool to mark their names.

-An elderly couple climbed the dunes more than once, all during the time we did it just once. They shared their story, which was that they were getting ready to hike out west so this was good practice. Good for them for staying active!

-A woman was exercising on the steps. She ran up and down more than once while we were there. As we headed down, she wasn’t just walking or running up, she was jumping step to step, and doing all sorts of other maneuvers. How I would like to be as fit as her! Though I didn’t stare, I did find some of what she did interesting and inspiring, and therefore looked at her a time or two (or maybe three, lol)!

-The dark rain clouds were looming ever closer. We almost didn’t even make it down in time, which is okay. It’s not like we would melt or anything, but no one really wants to get poured on and then have to drive a good distance home. I do think the sky was super pretty, though! It’s always cool watching storms roll in from the shoreline. Here’s a pic: 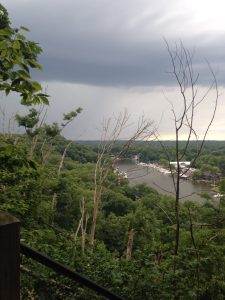 Overall, it was a lot of fun. The kids did super well, we all got great exercise, and the next day we weren’t even sore! So that’s got to say something, in my opinion.

I would like to hear from you! Where have you gone hiking? Have you climbed a lot of steps at one time like this? It doesn’t matter where you live…please share your experiences. Maybe I’ll get to go/try someday!