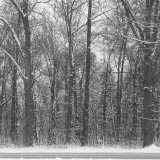 January in Michigan would make you think that snow is a given. However, this past season we have seen barely any snow at all. Christmas was green with temps way above freezing. Then as the new year rang in, temps remained above average and precipitation way below average. For me, that was depressing. We had a snowmobile trip planned for the middle of January and it seriously looked like we wouldn’t be going.

But alas, God came through for us! We kept telling our boys to pray for snow (just like we were), and each and every day my oldest son kept checking the radar. Last weekend is when we started seeing the snowflakes appear in the forecast. And today? WE HAVE SNOW! Not just a dusting either. We have the stuff that’s going to stick around for quite a while. The kind of stuff that’s going to be perfect snowmobiling on in just a few short days here.

But there’s a message I want to share in regards to snow. Each and every snowflake is completely different from another one. There are no two snowflakes that are the same. And as I stare out the big front window watching the snow peacefully fall from the gray sky up above, there are so many, many of them that it’s way to hard for me to fathom the idea that there are no two the same. Again, that’s God for you, though.

What about us? I think the same could be true for us humans. There are no two that are the same. Sure, there are twins and other multiples, but no two are exactly the same. We have different likes and dislikes. We have hobbies and interests that differ from others. Our hair, skin, DNA – all different from others.

But what’s great is that God is behind us just like He is behind the snow. He forms us all the way He wants us to be. We’re unique. We’re ALL beautiful just like the snow is beautiful. It’s amazing the things God show us!

Celebrate being YOU because no one else can do it better!