To celebrate the release of book 2 in The Secret Keeper series, In the Dying Light, by Angela Carling, we are going to have some fun! In fact, at every stop in her blog tour, you’ll have a chance to enter to win her first two books and she’ll be talking about different people in history that really could have used a secret keeper.

Who comes to your mind first? Don’t tell me yet. First, Angela is going to give you the skinny on Secret Keepers: 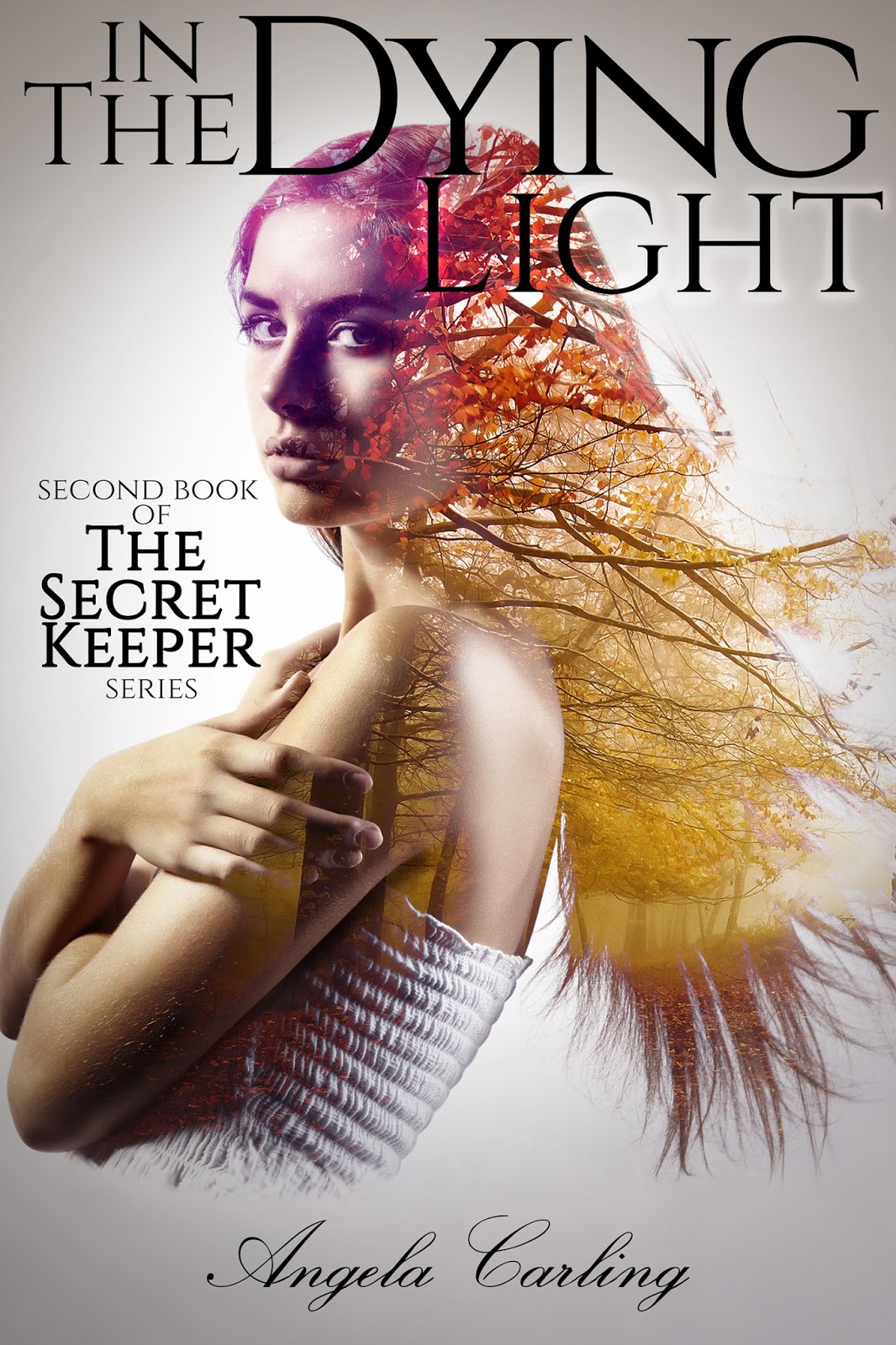 Book two of the Secret Keeper series, In the Dying Light, recently released, letting fans of the series slip deeper into Winter and Liam’s world now that their lives are forever changed by Winter’s deal with her Secret Keeper.

So what is a Secret Keeper? The short answer: a mystic creature that has the ability to take on your secret, erasing it and the associated consequences. Sounds pretty sweet, right? After all, everyone makes mistakes, everyone wishes they could erase the things that make them feel shameful—but there’s a catch. When you give away your secret to said enchantress, you agree to certain conditions, the most important, the next time you have a secret you will not be able to tell it—even if you want to.

In The Secret Keeper, book 1 of the series, Winter thought she was done having secrets and made the deal with her beautiful, but insidious, Secret Keeper. Little did she know that she would be the only one to witness the murder of her parents and because the murderer called out to her as she fled, “If you tell anyone, I’ll kill you”. Despite needing to tell her second secret, Winter’s tongue was bound by the curse leaving everyone she loved in imminent danger.

Yeah, holy something profane that I would never say…. and this is where
the story really picks up steam!

Also, if you want to take your chances, Angela is holding a giveaway for a digital copy of the first two books in the Secret Keeper series. All you have to do is click on this link and enter to win by telling her someone in history that you think really could’ve used a secret keeper or you can choose a different easy-peasy way to enter, like follow her on twitter or like her Facebook page.

Now that you know what a Secret Keeper is, we are going to talk about who could’ve really used one!

If you are a history buff or political junkie, you probably already thought of our 37th U.S. president, Richard Nixon, as a prime candidate for someone who really could’ve used a secret keeper. Although Mr. Nixon was an accomplished leader and brilliant man, he is most often remembered for his involvement in Watergate. See his major accomplishments here

We’ll never know, but you have to wonder if there was some point when President Nixon could’ve used a secret keeper and maybe turned things around….because the terrible truth is people are a lot more likely to remember our mistakes than our successes. Now what about his second secret…the one he couldn’t tell even if he wanted to?  Hmmm…I don’t think we really want to know.

Now it’s your time! Drop on over to Angela’s blog and enter to win. She’ll be posting your “people who could’ve used a secret keeper” on twitter all week so favorite the tweet if you see your guy or gal! Below I’ve attached lots of ways to connect with Angela, as well as an excerpt for book 2, In The Dying Light. Go and find her. She loves her readers even more than I love chocolate!

A little about Angela:

Angela Carling was raised in Palm Springs, California, but lives in Arizona with her husband, three kids and five felines.  After years of denial, she finally admitted that she is a hopeless romantic, which led her to write her first Young Adult book, Unbreakable Love. Since then she’s published three more books: Shackled, Becoming Bryn and The Secret Keeper. Shackled won the silver IPGA award in 2012 and has been optioned as a screenplay. She always eats the frosting off her cake and leaves the rest, and can be caught singing in public bathrooms.  When she’s not writing YA novels, she’s mentoring teen writers, making pizza with her family
or dreaming of taking a nap; not necessarily in that order.

Links to connect with Angela:

A book excerpt from Winter’s perspective:

I knew he had a secret. After six months as a secret keeper, I could always tell. Usually their eyes gave them away. This time it was his body language: his shoulders slumped and his hands hung low, barely touching the sides of his pressed business suit. I wasn’t fooled by his expensive clothes. Rich people do stupid things, too, and this was going to bad one—one that would break hearts and destroy lives. It might be infidelity or a business deal gone wrong. Whatever
it was, his confession was going to be painful to me.   He was the cocky type, bound to do something stupid again. He might even come back to me. I could entice him to make a final deal, and I would be free of the secret keeper curse. I pushed aside my own despicable thoughts.   He prodded along, inching ever closer to me. He knew I was his savior. I didn’t know who’d told him, but he was sure I could make his secret go away. I leapt up from the park bench and ran. My bare feet made almost no noise on the long sidewalk that pushed me deeper into the city.

“Wait!” he called, his footsteps pounding overly-loud like angry blood coursing through my veins. I ducked behind a one-story building and slid my body against the scratchy stucco wall. My shirt snagged and tore, leaving my tender skin vulnerable.   He kept in pursuit. “I have to tell you my secret,” he screamed into the long alley that bridged the distance between us.

“You have to fix it!”   The word it reverberated off the walls like an odd, taunting echo. I turned, and the man behind me was inexplicably next to me. He grabbed me, pinning me to the wall with his whole body. He smelled of rot, stinky wet forest rot, of life breaking down and disappearing forever. I hated that smell. It was the scent of the secret keeper before me. Now, because I bore her curse, it would become my stench. I thrashed against him, but he held me firm. Every muscle in my body tensed. I closed my eyes and braced myself.

“I killed my partner so I could have control of everything,” he confessed.   Words sank through my porous skin and into my defenseless soul. I arched my back in pain as I absorbed and erased his unthinkable crime. A scream tore through me and out into my dark apartment.

I sat up, abruptly woken from my nightmare, gasping for air. My hand went to my face to find it sticky with sweat, and my heart raced as if I’d actually been attacked. The dreams were getting worse. The longer I was a secret keeper, the more real they felt. Now I wasn’t just taking on secrets during the day, I was reliving them at night with unforgiving clarity. Is this what my secret keeper experienced? No wonder she hid herself in a forest so no one could find her. No wonder she was willing to let me suffer so she could be released.

I blinked my burning eyes and tried to focus. With fumbling fingers, I reached for my phone. It was a gift from my boyfriend Liam so that I’d never have to feel alone. Once I’d become a secret keeper, no one, not even my parents remembered me.   My heart rate was slowing down, but I still struggled to push the right buttons. I hit send, and my eyes darted to the clock. I’d been in such a fog, I hadn’t considered the time. It was 3:00 a.m. Liam would be sleeping, exhausted from his classes and work. I quickly mashed the glowing rectangle with the words End Call. The screen went blank, and then a picture of Liam and I standing in front of a sign that read Welcome to ASU filled the dark space.   I ran my hands down my face as if I could wipe away not just the bad dream but the last six months of my life. I let myself fall back on the bed. On my unclad arms I felt the dampness left by my sweat. I’d have to wash my sheets again tomorrow. I’d do it after I met Liam tomorrow night.

Thanks for reading and may you never need a Secret Keeper!